The idea to use playfulness and objects to prevent stress and burnout was borne out of the Founder, Enoch Li’s, experience with depression and suicide attempts, which debilitated her. Through the tortuous journey, she discovered how widespread the issue of depression is, with 350million+ people around the world suffering from depression according to the WHO. For her to fully recover, she had to confront her fears and shadows.

During Enoch’s major depression experience, serendipity had it that she discovered Gund Snuffles bears, and bought the white 14 inch version and named him “Floppie”. Floppie stayed with her throughout and was her comfort pillow at times. Other times, she would hit him and let out her anger and sadness on him. But he always smiled his adorable grin and looked up at her with all the warmth in his face. In the course of recovery, she started collecting Snuffles. She gave each one a name. She gave them personalities. She made up stories for them.

In psychology-speak, Enoch projected the unbearable parts of herself on to teddy bears, making sense of her experience through the externalization of emotions. In the process, she realized she had forgotten how to be playful. Unexpectedly, she discovered a way to lift moods and explore her creativity and purpose in life — she played again, and found revelations in her inner child.

Subsequently, after her studies in organizational psychology, Enoch founded Bearapy, to apply the power of playfulness to help others become mentally healthy, prevent burnout and stress in the workplace. Play is essential in adult learning, creativity, and stress relief.

Thus, the term is coined: Bearapy. You can find a list of the Bears in the Bearachive. Each bear has an ID card listing their personalities and their cuddle ratings, determined by how huggable they are.

Bearapy calms you down. Bearapy allows you to leave the stress-filled world behind. Bearapy stimulates your creativity. Most of all, Bearapy simply makes you smile.

Feel free to contact any of the bears or The Bearalist. Each bear will respond in their own way.

With a bear hug, 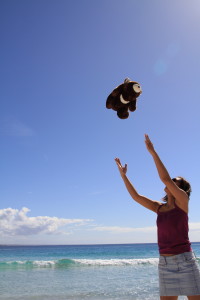